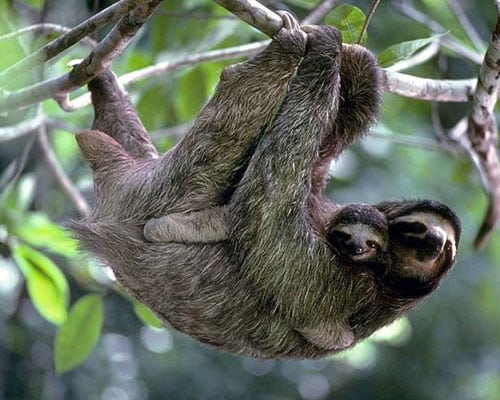 Manuel Antonio National Park. This wilderness area is located on the Pacific coast of Costa Rica in the province of Puntarenas.

Manuel Antonio National Park is located about 157 miles south of San José by road and 7 km south of the town of Quepos.

Manuel Antonio National Park is a small biological island in an area subject to various activities such as agriculture, livestock and tourism development in height. 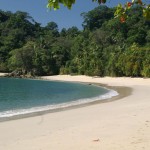 Part of the forest is being regenerated, as in the past has been the subject of a selective extraction of wood.

One of the countries most beautiful scenic national parks. It is the wilderness area that receives the most international and domestic tourism.

Another major attraction is the rain forest where species of flora and fauna in danger of extinction, as the marmoset prefecture.

A feature worth noting is geomorphological Punta Catedral. In the past it was an island and because of sediment accumulation, joined to the mainland, forming a sandy isthmus called belt.

The park is located in a region of heavy rainfall and high temperatures.

The average annual rainfall of 3875 mm. The dry months are January, February and March are the wettest August, September and October.

The most characteristic species of flora within the primary forest are red Guácimo, the pillar, the maria cedar, locust, Sura, the wood of black locust tree in danger of extinction, the milky, arbutus, and cenízaro ceiba.

In secondary forest, which covers old and patoreo growing areas, the most common species are the balsa, monkey comb, Guarumo the Guácimo, cherry and white garocho. The mangrove covering approximately 18 hectares, is made in. rtres species: red mangrove, Buttonwood and Ladybug.

The beach vegetation is the Manzanillo tree that has a milky and poisonous fruit, almond, oak savanna and coconut.

The fauna is diverse, distinguished 109 species of mammals and 184 birds.

Among the most notable are the raccoon, coati, agouti, two-toed sloth, three-toed sloths, white-faced monkeys, howler monkeys and squirrel monkeys, a subspecies endemic to the park and is in danger of extinction Due to habitat destruction and their use as a pet.
The region is also frequently observed species of birds like the toucan, pelican or hyacinth, grouse, osprey, kingfisher and jacana green. It is possible to see iguanas and lizards, snakes and insects innumerable.

The main environmental problems of the park is poorly planned tourism development in the region, causing the massive influx of visitors to the area and pollution of the sea In addition, large-scale monocultures degrade soil and sediment occur in sea garbage and feeding of wild animals by visitors are other problems in the region.

There are three programs for park management.

The environmental education program designed to help develop environmental awareness among residents of communities near the park.

Protection Program, which aims to maintain the minimum level of physical alterations and human biological in the park visitors and provide protection for personnel and ensure compliance with applicable conservation laws.

Finally, the Administration Program, the participation of local communities and public and private organizations in planning and development of the region.