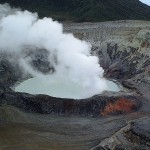 One of the most visited national parks in Costa Rica is the Irazu Volcano National Park is located about 32 kilometres from Cartago, former capital.

Home of the highest active volcano in Costa Rica Irazu, the volcano stands at about 11,260 meters, and this national park has a very convenient located near the city and is within easy driving distance.

To reach the Irazu Volcano National Park, you can take the short drive or bus ride from San Jose, which is about 50 km to the east, and from here you can take the highway to Cartago, enjoying the beauty of the country views along the way.

“Irazu”.” An active stratovolcano, Irazu has had a series of volcanic eruptions in recent years.

The first recorded eruption was in 1723 by Diego de la Haya, after which one of the five craters of Irazu has been appointed.

The Irazu erupted for the last time in 1994. Nevertheless, in 1963 just the same day President John F. Kennedy made an official trip to Costa Rica, the volcano woke up after a period of 20 years, then went to stay active state for two years before went to inactive. 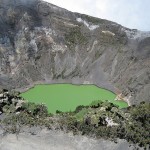 With an area of 500 square kilo meters at its base, the irazu is also the largest volcano in Costa Rica.

Volcanic ash has made the surrounding soil very fertile; however there is not much wildlife to be found here, because of the volcanic activity.
Foxes, Robins, owls, rabbits, hummingbirds, coyote’s porcupines, are some of the commons animals that can be observed in this national park.
The scenery of Irazu Volcano is actually quite surreal.

With most of the national park forests on the Caribbean side volcano.

The volcanoes surrounding vegetation is mostly a forest that has gaps in shrubs and bushes.

High on the summit of Irazu, only a few plants are found that have adapted to the harsh and cold winds that blow here.

One major attraction of this park is the ascent to the crater of the Hague Diego has 300 meters of green lake in the canter of it.

You  allow driving to the crater or hiking on foot, but do not forget to bring some warm clothes as it can be pretty cold up there.
The best time to of year to visit is between March and April, as there is not much rain, and visitors can see both the Atlantic and Pacific Ocean from the summit of Irazu on a clear day.

Many hiking trails are found in the park, and several services, shop, souvenir, picnic areas, restrooms, and much more..

We Provide Transportation and Private Transfers in Jaco Beach..