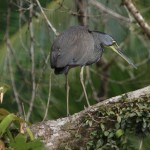 Tortuguero National Park is located on the Caribbean coast of the province of Limon, about 80 kilometers northeast of the town of that name. It was established by Law No. 5680 of November 17, 1975. It has an area of ​​18.946.9 hectares in the terrestrial and 52,265 in the navy.

It is the most important area of ​​the entire western half of the Caribbean for the nesting of green turtles. Other species of sea turtles that nest on the beach are the leatherback and hawksbill.

The park is crossed by a natural lagoon sitema and waterways of great scenic beauty and habitat of the species of turtles, manatees or sea cows, crocodiles, a variety of crustaceans and some 52 species of fish in fish fresh water, including the GAR.

It was created to protect the flora and fauna of this region and to facilitate research, scientific studies and provide environmental education.

There are three life zones: tropical rain forest, premontane wet forest transition to basal and jungle. Includes eight types of associations (trees, shrubs and herbs) and three smaller associations (mostly grasses).
Coastal vegetation dominated by grasses, with abundant layers of the rainforest and vertical, dense and varied characterized by ferns, palms and various species of Annonaceae, white woods on the hills, yolillales, mainly from the palm of raffia and located in the central sector of the park, herbaceous swamps formed by herbaceous plants of haste 2 meters tall and herbaceous communities on lakes with floating vegetation as choreja or water lily, are among the most important plant associations of the park. 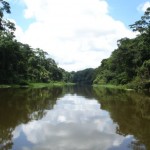 Tortuguero National Park is one of the rainiest areas of the country, between 5,000 and 6,000 mm per year. We can distinguish two types of rain: local downpours of short duration are the most frequent, and the time characteristic of the Caribbean that extend up to 15 days. The latter are caused by winds from the north and northwest.

The fauna in Tortugero National Park is rich and diverse. Among the highlights are the tapir, the jaguar, ocelot, wild boar, the howler monkey, the monkey-faced, red or spider monkeys, sloths, tepescuinte, coati, raccoon, hammers, otters, tolomuco , the fishing bat is one of the largest in the country and feeds on fish catch with his strong legs and claws when hovering over the water surface, raising reticulated glass frog whose internal organs are visible through its transparent skin, poisonous frog or toad red, whose skin is toxic.

Some of the protected birds are macaws, endangered species, the peacock, the turkey vulture, hawk, purple trogon and the oriole of montezuma. In addition, the leatherback, hawksbill and green turtle, the turtle turtle black, is very common in the canals from Moin to Torguguero.