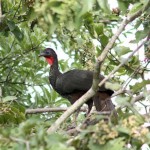 Santa Rosa National Park, located in the province of Guanacaste, North Pacific, just 36 miles north of the city of Liberia.

One of the most historically important areas of the country, the house and the stone corrals were the scene of the most heroic national: The Battle of Santa Rosa on March 20, 1856.

The park is important for the protection of habitats and climate restaruración region known as the Dry Pacific. Nancite and Naranjo beaches are very picturesque and beleza important areas for sea turtles and olive ridley and leatherback.

The leaves are composed mainly of Jaragua grass and scattered trees such as oak oak, nance, the stick or the cornizuelo chumico raspaguacal and pumpkin. The deciduous forests contain about 240 species of trees and shrubs: the guanaco, national tree, the naked Indian, oak savanna, chaperno, jobo, the kapok tree, strawberry tree and gu unleavened.

In the evergreen forest the dominant species with the medlar, the oak, Tempisque and the Aceituno. Wildlife is abundant and diverse. It has been observed espefcies 155 of mammals, more than half are bats, 253 birds, 100 amphibians and reptiles, and more than 10,000 insects, including some 3.140 species of butterflies and moths.

Among the mammals are the howler monkey again, the white-faced monkey, armadillo, sell dantea, coati, chestnut, Puna, jaguars and raccoons. The mouse semispinalis is the most abundant mammal of all.

Some of the more striking birds are magpies, parakeets frentianaranjada, the red widow, the wren Matraquero cargahuesos, the peacock, the crab hawk and long-tailed Manakin.