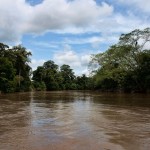 The main rivers of the Pacific slope are the Tempisque River, which rises on the slopes of Volcan Orosi, with the name of Tempisquito.

Before the construction of the Pan American Highway was the main means of communication in the province of Guanacaste through its two tributaries and drinker Baggins.
Also Tárcoles River, formed by the confluence of the Rio Grande and San Ramon Virilla. The latter is very important because wastewater drains the Central Valley.

It was the first stream which was used for the production of electricity.

The main rivers of the Atlantic are the San Juan River, which forms the border between Costa Rica and Nicaragua. This river belongs entirely to the Nicaraguan state, although Costa Rica has the right to commercial shipping that, under the Treaty limits Cañas-Jerez 1858.

It takes a lot of sediments, which have obstructed the main mouth and, therefore, part of its water flows down the Colorado River, which originates 30 km before its mouth and belongs to Costa Rica.

The Rio Tortuguero owes its name to the large number of turtles that visit the area.

The rat population has fallen to levels of extinction by the actions of humans. No of course, but forms a network of rivers, canals and navigable lagoons, very picturesque.

Reventazon River and the Rio Jimenez converge to form the Rio Parismina in the center of the Central Valley because it collects the waters of the eastern sector (Valle del Guarco). In its course it receives several tributaries, including the Macho Tapantí, and Navarro.
Sixaola River serves as boundary between Costa Rica and Panama. Its tributaries Yorkín, Coen, Lari and Uren. It also serves as a means of communication between different peoples. 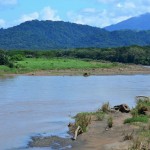 Tárcoles is critical because it provides water to three provincial capitals of the country, San José, Alajuela and Heredia, which comprise 35 municipalities in an area that represents only 4.15% of total earth. However, this is where the largest concentration of people in the country, approximately 63% of the population.

The Tempisque River Basin and the Rio drinker are of great importance for agricultural use is for approximately 75% of the total water available for this use throughout the country. These basins cover a large part of the province of Guanacaste, known as a producer of livestock and crops such as sugarcane and rice.

Costa Rica has only two relevant size lakes. These are the Laguna de Arenal, which is artificial, and Lake Cachi, which is also similar artificial and Arenal, to produce electricity.

Costa de la Laguna (680 m)-also known as Laguna de COTER-is located north of Lake Arenal. It has a diameter of about 1 kilometer, with 11 mt. deep. Several Costa Rican scientists are of the opinion that it is a crater due to geological features that have now are recreational and tourist can take a boat tour and even enjoy fishing.

Currently, the reservoir of the hydroelectric project in the country, Lake Arenal is a vast body of water surrounded by hills that keep the grass and patches of forest.

Outstanding at the end of the east side, is the conical shape of the volcano, which regularly erupts spewing lava flows and enormous clouds of ash.

Despite all drivers around the lake are impressed with the scenery, Arenal is especially popular among fishermen and “windsurfing”. Anglers are attracted by the guapote, bass or rainbow, a fish that blooms heavily on the lake.

The “windsurfers” are in the far west side of Lake Arenal, where strong and consistent winds make it one of the best places in the world for this sport.

This lake is 400 m, is located about 8 km. San Miguel de Sarapiqui, on the way to Venice, has an area of 40 ha., Has a depth of about 75 mt., Being the deepest natural lake in Costa Rica.

Scientists suggest that the lake occupies the crater of a volcano. For the rich biodiversity of the tourist has an enormous geological and biological.

The trip through the channel of the lowlands is the most popular of Tortuguero (Caribbean), which run along the Atlantic coast north of the port of Moin to the communities of Parismina, Tortuguero and Barra del Colorado.

Most travelers head to Tortuguero National Park, which protects an important nesting beach for sea turtles and large tracts of lowland rainforest and wetlands.

A trip through any of the extensions of the channels is a real jungle adventure, offering the opportunity to see animals such as crocodiles, three-toed sloths, orioles and herons. It also offers world class fishing for tarpon and other species.

This waterfall is known for a series of anecdotes about the origin of the name, adorns the foot Picacho and can see how Ujarrás Valley road in the area of Paraiso and Orosi.

Located in the community of Cinchona on the route of Varablanca-San Miguel de Sarapiqui, seen from the road surrounded by a dense forest, which is part of Braulio Carrillo National Park, has a waterfall of 70 meters.

From San Gerardo de Dota is due to walk about two hours between primary forests observation of flora and fauna of great striking and reach this waterfall with a drop of forty feet.

It is located near the community of Vara Blanca and Cinchona on the road to Sarapiquí is a cascade of extraordinary beauty because of the natural environment that are two hops is small and one large and imposing that crown the fall seen along the road and harmonized with a wooden bridge structure considered a work of art.

We have developed a structure of routes and points of view in some places, allowing a remarkable natural landscape, including forest, river, waterfalls and wildlife.

It is a waterfall seen from a road (the community of La Isla) and can be visited along a path parallel to the river bank Angel (near the community of Tern), has a cascade of 100 meters, but only the upper part is exposed to air.
Llanos de Cortez Waterfall (Bagaces)
It is a few kilometers north of the city of Bagaces, road to Liberia, where a left turn that leads to this place. The falls are surrounded by lush vegetation and several meters high. Its waters are a beautiful color that falls into a pond where you can swim and has the distinction of having a white sand beach.
Go The Julianes
The main entrance is on the Santa Maria de Dota, the access road to Los Julianes virgin is a mountainous area popularly known as Bayonet row, is a cascade of about ninety feet high.

One of the most striking attractions, is located 5.5 kilometers from Fortuna, has designed a trail with a steep slope that allows the observation of a waterfall that falls from 70 meters. Proceeds from the entrance of the waterfall are used by the Association for the development of several projects and social welfare activities in the area.