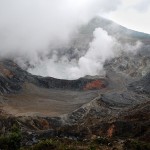 The conservation histoy of  Poas Volcano began in Tennessee in this Great Smoky Mountains in the 1960’s. Mario Boza was a student, when he travel to visited the park in the United States and was very impressed that he developed a plan to lead the area around the Poas Volcano, in a similar manner, introduced him as his master’s thesis, and continued the implementation.

The plan was adopted as an in the rough , part of the birth and development of the national park system in Costa Rica.

Attractions and Services
The Poas Volcano is a persuasive symbol of the geothermal forces that formed the Costa Rica we have today.
When the fog and clouds will sulfuric, bubbling, green rain-fed at the bottom of the lake, surrounded by smoke and steam rising from fumaroles.

Lake water is continuously filtered through cracks in the fairly hot rock, evaporated and the creation of steam of bubbles. When the pressure in these bags exceeds the force of water above the hot steam breaks through geysers that rocket up to 820 feet (250 meters). Do not worry about having a shower; however, the crater is 1,050 feet (320 meters) deep. In nearly a mile (1.6 km) through it is also the largest active crater in the planet.

The Poas Volcano is active, but do not expect to see a rash of right or of any lava flow here, the most recent period of eruptive activity has ended in 1954. The main activity last was in 1910, when approximate a million tons of ash was expelled along with a huge column steam and  smoke and steam.

With A modern visitor center and a small museum, explains and interprets the ecological attraction and geothermal in the park. Also Services for coffee and hot drinks as much to wrap your hands around to keep warm as anything else, sandwiches or even snacks.
Poas provides excellent extreme example, of the effects of acid rain. Around the boiler, and for several miles downwind, so the vegetation is stunted black brown and contaminated by moisture that falls from clouds ubiquitous near the top.
Paths lead through cloud forest stunted and twisted, this is not only by volcanic emissions, but the rigors of the cold environment of high wind.

The Lake fills an extinct crater at the end of a road, so it is home to a variety cloud forest birds including, tanagers, toucans, hummingbirds, tanagers, flycatchers, on of most famous is the resplendent quetzal and so much more. 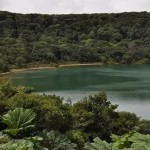 Volcano Poas National Park is an easy target for a day trip from most locations in the central valley, It it very easily combined a big list of  other activities in the region.
A coffee tour in a farm is the perfect way to handle the cold in your bones after a early morning in the top of Poas.
Then lower slopes of the Poas Volcano, are covered with vast plantations of fruit and ornamental flower farms. Most roses, lilies and other flowers grown in this region are taking to the airport Juan Santamaria in the central valley, then sends air to Miami, where there are place on planes ready for all parts of the Canada and United States.  Probably you have already seen some of them at your local flower shop.

When is the best time to visit?

If you like to see the crater in the Poas Volcano National Park the morning is the best time to do it, during the dry season from January to April.

Clouds building start from the late morning and hide views in the crater, in the northern lowlands and in the central valley as they travel to and from the park. Due to its proximity to San Jose, the park is very popular among Costa Ricans, especially on weekends.

Now if you decided to visit and if it is clear, use sunscreen. At this point, is near the Ecuador, the sun’s rays are more intense and you can get a sever burn in an hour or even minutes.  Do not forget your jersey and jacket. Inclusive at midday can be almost frozen at this elevation, and the wind is always whips around the crater.