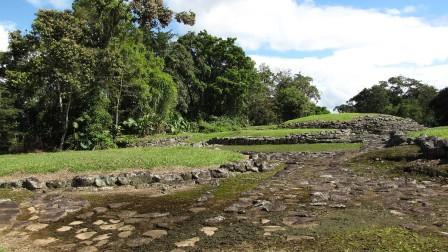 Guayabo National Monument  is located in the foothills of the volcano Turrialba, 19 km northeast of the city of that name, in the province of Cartago.

Is one of the most important archaeological and larger than was found in the country.

Protect archaeological structures such as causeways, mounds, bridges, aqueducts and other catchment tanks.

Costa Rica, its geographical position and conformation, has played an important role as a contact area between pre-Columbian cultures.

Archaeologists have shown that Costa Rica has been influenced North and South America. 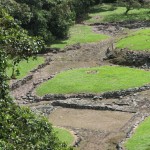 Guayabo National Monument belongs to the middle area, ranging from the province of Alajuela in Costa Rica to Colombia, Venezuela and Ecuador pieces.

The research found that archaeological site was occupied from the year 1000 BC to 1400 AD.

The archaeological zone is composed of 15 to 20 hectares, of which only a small portion has been excavated.

The foundations of stone mounds are generally circular base and sizes. We find from 0.50 to 4.5 meters high with a diameter of 10 to 30 meters.

The roads consist of a set of paths of stone used as transit routes through the drainage system. There are some roads that extend in different directions of the excavated area, several kilometers in length.

Steps or stairs are stone structures for overcoming inequalities.

The aqueducts are open or closed channels to transport water to the desired locations.

Storage tanks are stone structures of rectangular shape, which were used to store the water brought by aqueducts.

The tombs are located in different sectors of the archaeological site.

Built with rocks and stones, are called tombs of cajóón. It should be noted that tubmas discovered so far in the National Monument Guayabo were looted by haqueros in the past.

As manifestacions artistic stone carvings or petroglyphs are abundant .

They are located in areas of archaeological features and have yet to be deciphered.

Another manifestation is the monolith engraved with the figure of two animals are very characteristic of Costa Rica, the jaguar and caiman.

For all these discoveries, archaeologists conclude that this pre-Columbian city was inhabited by people specialized in different areas, led by a chief, who was in political and religious power over a wide area.

The causes of the abandonment of the city or the extermination of the indigenous groups closely before the Spanish conquest. Among the assumptions mentioned diseases and war.

Among the fauna are birds such as toucans, orioles, trogons, woodpeckers, word-words, piapias, thrushes and grouse, mammals such as armadillos, rabbits, coyotes, lazy, tayras, the kinkajous, squirrels and raccoons. Also common are snakes, frogs, lizards and butterflies.