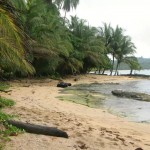 Gandoca Manzanillo Wildlife Refuge is  Located on the Caribbean coast, in the canton of  Talamanca in the province of Limon.

It has a pond, by which this part of the Atlantic coast is classified as tropical forests.

The remaining primary forest in this area is a single value, the relative area covered by pequña this area of life in the plains of the Atlantic coast.

The region has a wide variety of terrestrial habitats with patches of primary forest and habitat for many marine and dulceacuíferos, including the coral reef that is kept in better conditions on the Atlantic coast of Costa Rica.

By natural conditions, the region constitutes an attraction for scientists and visitors seeking recreation.