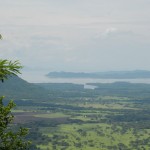 The Barra Honda hill, about 300 meters high, consists of the type of limestone reefs, ie reefs by age because sobrelevantamiento mergieron caused by tectonic faults, developed about 60 million years.

These reef formations made up of blue and green calcareous algae and foraminifera, tiny marine protozoa covered by a calcareous shell, sponges and sea urchins.

Another important element of this area is its ability as an aquifer reserve populations are around.

The Barra Honda National Park  contains an extensive system of independent caverans others that have been explored 19. The cave of Santa Ana reaches to 240 meters deep, contituyéndose in one of the most profound.

The most attractive and interesting are: the Velvet, Tampa and Santa Ana, with a profusion of stalagmites, stalactites, columns, beads, flowers and needles of gypsum, helicitas, popcorn, mushrooms, shark teeth and other features .

Velvet is the most abundant cave containing formations. One of them is called the body and has the characteristic of different sounds to the tap.

The trap is the one with the deepest abyss, from the entrance to the first drop is a vertical height of 52 meters. This cavern is also larger rooms have been found, one of which is formed by white calcite, which gives a dazzling effect of beauty.

The well has been a failure, which owes its stench of bat guano is the only one with an abundance of these mammals.

In Nicoa cave, they found a large number of human remains in 1970, and later pre-Columbian artifacts from India.

The park’s vegetation is in most deciduous, some of the most common species are rum-rum, Tempisque, El Jobo, Nude India, poroporo, the buzzard, soncoya, the guanaco, the carao, strawberry comb and Economic.

The fauna is very diverse: white-faced monkey, coyote, armadillo, armadillo, deer, raccoon, badger, weasel, fox missing, the magpie, the zapayol or Cataño and turkey vulture are some species can be observed in different areas of the park