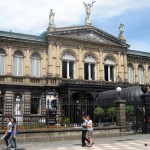 Costa Rica is in the center of the Americas, is heavily influenced by Spain, following the conquest of the European country.

Costa Rica it is believed to be inhabited at least since 5000 BC,these natives were very few and very disadvantaged technologies compared to pre-Columbian civilizations.

The Costa Rica we know today was discovered by Christopher Columbus, and named Costa Rica in 1502 during his fourth voyage.

After that, representatives of the Spanish government combined with the help of Catholic Church lead it development, some believe that it was separated historical trends in Latin America.

In contrast to that Other historians disagree with this view and believe that the culture of this nation was reinforced by the influence of powerful indigenous civilizations like the Incas in South America, and the Aztecs in North America.

Despite the Spanish influence visible. Their customs, especially religious, are part of the folklore of these wonderful country in Central American.

Spaniel Conquistadors planted the seeds that were the basis of future generations of descendant’s government. Costa Rica Indian tribes are less than one percent of the total population. Some of the features of his legacy survive, leather goods and clothing, Jewelry designing, handmade crafts, and much more.

The Country is considered one of the most stable places in Latin America; the country is characterized by high standards of living and education.

Costa Rica  has become a multicultural society thanks its number of visitors evidently some of are now regal residents, from other nations.

A great deal of  people have been attracted to Costa Rica, A country described as hospitable and equality, because the Constitution guarantees equal under the law, to citizens and foreigners.

The Costa Rica’s main religion is Catholic; with totally religion freedom as part of the democracy.The Black on Caribbean, the descendants of Jamaicans brought here with an objective of building the Atlantic Railroad, They’re main religion is mainly Protestant, With Also Jewish, Chinese and others who maintain their own beliefs.

Costa Rica’s Democracy is not only the form of government of Costa Rica; it is also the backbone of this country, the country has more teachers than policemen and the army was abolished in 1949.

Costa Rica have done a really good offering services such as electric service, potable water, public or private phones, most importantly, has free and compulsory education in primary and secondary schools, with lactation throughout the country, along with several health centers governed by the Costa Rica’s State

The presidential and legislative elections are held every four years under the supervision of the Supreme Tribunal of Elections Elections “Tribunal Supremo de Eleciones”, which is totally independent.

Costa Rica’s cuisine is a combination of Spanish, Latin, Caribbean and South American influences. This style of cooking is shared by most of Central America, although local variations have appeared in each individual country.

A national dish is Gallo Pinto, though the name has nothing to do with the ingredients. It is a combination of black beans and white rice and flavored with cilantro, onion, garlic, seasoning salt and the main ingredient Salsa Lizano.

Normally  the Gallo Pinto is eaten at breakfast with eggs, and sour cream, Tortillas and Tortillas and Fried plantains, bread is also common. The dish Gallo pinto is very common in Costa Rica and Nicaragua where even a dinner dish.

Some others typical dishes are rice with chicken, fish, steak, bee pot, casados, rice with chicken, (arros con pollo ) is composed of pieces of bite-sized chicken mixed with rice and chopped vegetables including carrots, peas, corn and chickpea.

Bee pot mainly prepared on weekends. It’s a sweet corn broth prepared, the vegetables usually need to be bowl first on whole to large-sized, and then add the meat and pieces of spices.

Mostly The soup is eaten in a bowl of broth and separate dishes for vegetables and some rice.

A Casado is a dish that includes black or red beans, rice, meat, fried plantains, one or more side dishes. This dish is customizable you me have it with meat, chicken to beef and fish. Some of the more common Examples of side dishes include green salad, pasta salad, potatoes, beans wrapped in egg, fried eggs, spaghetti, or bearded.